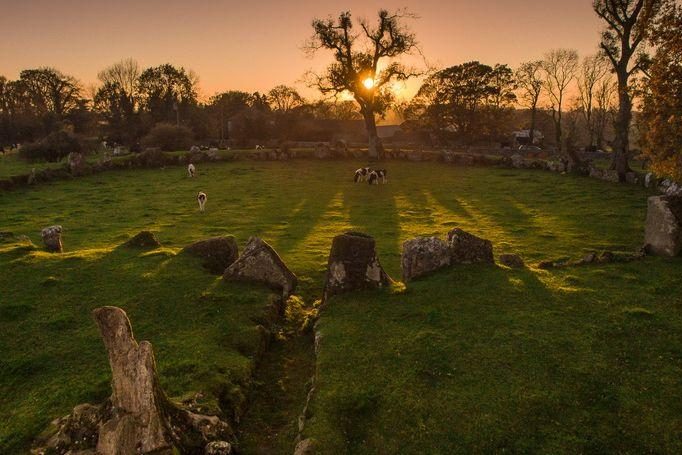 In today’s world where most if not all of us use our mobiles to tell the time, date and weather, it’s so hard to believe that thousands of years ago in Ireland people used stones and trees to tell and celebrate the time of summer solstice.

The summer solstice is and has always been a time for celebration as it sets off the official start of summer as our part of the planet angles itself closest in orbit to the sun, causing the longest day and shortest night of the calendar year. In Irish solstice means grianstad or sun standing still, and like many other ancient cultures around the world the Irish celebrated the summer solstice to honour the light and our connection to the Sun and the Earth. In Ireland the summer solstice has been observed by humans as early as the Stone Age, and was a significant holiday for our pagen ancestors. In the past, summer solstice traditions included spreading ashes from bonfires across one’s garden to bring a bountiful harvest, to wearing protective garlands of herbs and flowers to ward off evil spirits. In 2022 it means a few days after fathers day, the end of the school year, when you buy sunscreen or something insignificant, it’s almost impossible to fathom that the things we currently worship will be gone and forgotten about in a couple of years but ancient objects like stone circles and ogham stones will be around for many hundreds if not thousands of years to come.

Eventhough Stonehenge in England is the most well known summer solstice location – in Ireland our most prominent sites are located at Grange Stone Circle, Lough Gur in County Limerick and the Hill of Tara in County Meath – both are mystical and enchanting places of stone circles. Specially magical at the Grange Stone Circle site is the way the 113 standing stones are perfectly aligned with the rising sun of the summer solstice, but also by the number of oak trees that surround the site. In ancient folklore the oak tree is associated with the summer solstice as the doorway into the inner realms. Known as king of the forest for its strength and longevity, the oak was most sacred to the Druids who revered the knowledge held by trees. The name ‘Druid’ is derived from the Irish word for oak: “oak” (dair or duir) meaning door and (doire / oak grove) “they who know the oak”.

In our post covid time when the environment is showing us clear signs that we are damaging it, one must ask the question, how did the old Irish have such a strong understanding of nature and work in harmony with it? Our current understanding of nature is glamping in a fancy site in the woods or visiting an expensive activity park. Our consumerist values and our demand for immediate content will leave little behind for our future selves to look back at and admire. Our pagen past was and still is amazing and we should take our faces out of our phones and get out there and absorb it.

So no matter what, on the 21st June 2022, the oak king will be at his strongest and gradually weakening his powers, until the winter solstice of the 21st December 2022 when the Holly King regains power again. So get out there and enjoy this summer solstice before it fades into the summer rain – Ireland’s fantastic mythical Neolithic and Ogham sites await you.