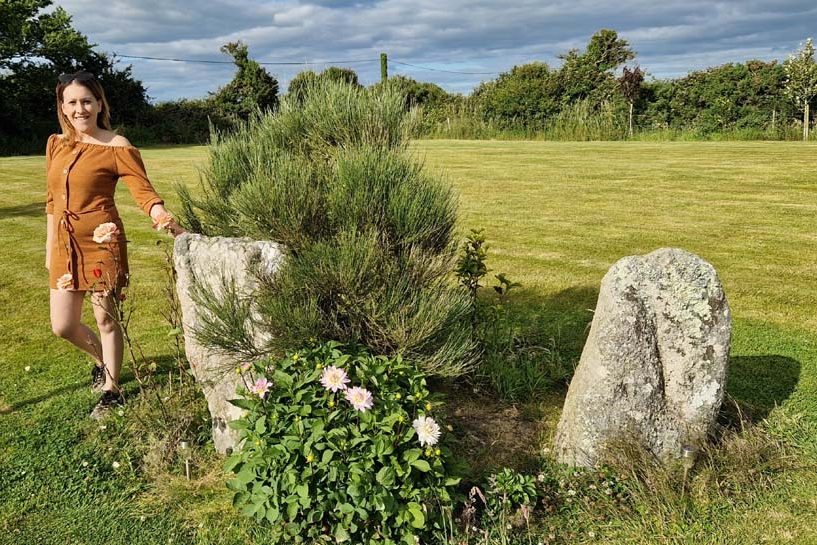 This stone pair is located on someone’s private property, behind electric gates so we had to ask for permission to enter the property to get access to these stones. There are two standing stones, but only the stone on the left is an Ogham stone, while the second Ogham stone is laying on its flat beside the main standing Ogham stone. There is Ogham writing on the main standing stone that reads “IARNI” in Gaelige and translated into English is “iron”.

Exact directions to the site are – Google Maps

Exerts from a county county report on the planning permission website shows:

From a search of www excavation ie (accessed 6″ June 2013) no modern excavations have taken place within the townland of Cotts. R.A.S Macalister did, however, conduct an excavation on the standing stone which later appeared in The Journal of the Royal Society of Antiquaries of Ireland in 1921 as follows:

“_..Through the kind offices of the Rev. Robert FitzHenry, P.P., of Broadway, I was enabled to make an
excavation under the stones last year. Through clear evidence of a previous disturbance of the soil was found such a disturbance as would have been produced in digging a grave – absolutely nothing, not even the smallest
scrap of bone, came to light. This was disappointing, as it might have been hoped that soomething [2 words unreadable by county council stamp]the Ogham would be found. Evidently in the damp soil the bones had all completely decayed [2 words unreadable by county council stamp] goods hade been deposited. Nothing is left but the name IARNI in Oghamt on the stone but as a negative result in excavation is as important as a positive, the fact of the excavation and its want of success should be put on record. For the purposes of the excavation it was necessary to take down the stones, but they were carefully replaced in their original position when the opening was refilled. The Ogham stone is red granite, 4 feet 1 inch above ground, 1 foot 10 inches brond, 1 foot 7 inches thick, sunk 1 foot 6 inches in the earth. The other, uninscribed, stone is conglomerate, 3 feet 10 inches above ground, 1 foot 11 inches broad, 1 foot six inches thick, sunk 1 foot 10 inches in the earth. The stones stand 3 feet 9 inches apart, in a north and south line, the Ogham being to the north. An irregular boulder of blue stone was lying just under the surface of the soil, between the pillar stones, and just west of the line passing through them: it measured 2 feet 7 inches by 1 foot 7 inches by 1 foot 6 inches. There was a sort of packing of rounded stones level with the feet of the pillars, and filling the space between them: these stones averaged about the size of a man’s head or a little less. The disturbed earth filled an irregular hollow measuring 2 feet 6 inches to 3 feet deep.’ (MacAlister, 1921, 77).

Full details of this report can be downloaded from here.